Duties of a herd in Woodlawn 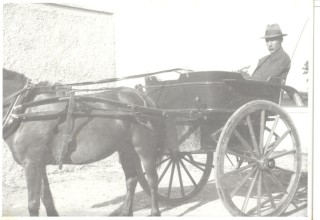 My grandfather, Richard (Dick) Seale originally came to Woodlawn c 1912 to work as a sexton at Woodlawn Church. He would have put on the fire, and kept the grounds tidy and in order. He then worked as a herd until the land was divided. A herd’s role was to stay walking and look after the stock. It was a full days walking, shifting them round. It was a huge operation. He might have started in Cloonacalleen, then worked his way home through Cloonahinch. It would be where there might be trouble with the livestock that he would head to. He might go out to Cloonacallis in the evening. They had to keep a log of the numbers of cattle and account for everything, like if one died. They were responsible for dosing, and curing any ailments that would arise. There was no calling the vet. A herd wasn’t allowed to keep any stock of his own. For all the people that came to Woodlawn they weren,t encouraged to put down roots. You could have young goats or lambs but a steward would come along and tell you when it was time to get rid of them. Keary’s house was a herd’s house, as well as our own home house. And Cairns, Monaveen was a herd’s house.