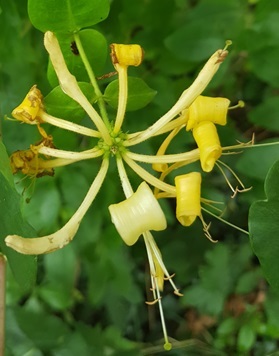 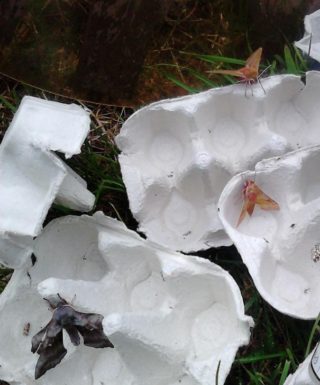 Identification Tips: A prolific climber of trees and shrubs. It has grey-green leaves which are opposite and oval. The flowers are a spectacular creamy abstract trumpet like creation with corollas of between 40 – 50mm. These flowers are followed later in the Autumn by bright red berries

A Bit More About Honeysuckle

Honeysuckle is also known as Woodbine in certain places. In many ways the names are often intertwined. For instance, both names are mentioned in A Midsummer Night’s Dream by William Shakespeare. It in which Titania says “so doth the woodbine, sweet honeysuckle entwist”.

Honeysuckle has a glorious smell which is much stronger at night. This sweet scent is supposed to help clear the mind with some even going so far to suggest that it may also promote physic powers. Also, if it grows near your house, count yourself lucky as it will attract money, love and luck! If not, then this is certainly a great reason to allow this plant to grow in your hedge!

Hawk Moths and other nocturnal pollinators pollinate the honeysuckle. Hawk Moths are a large in size and are varied in their colours. It seems to me that on a full moon or perhaps if the candle light was bright that these moths could be confused with the Faery Folk who are also known to visit Woodlawn Woods. In this picture, we can see Hawk Moths that came to visit a Moth Trap. Do they look a bit like faeries?