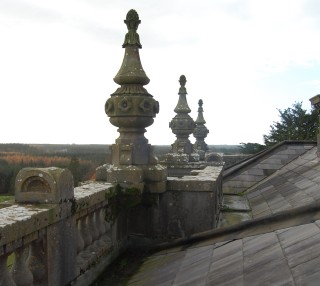 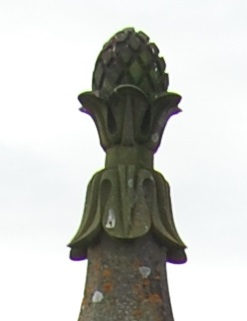 Pineapple Heads feature as decoration on the rooftop of Woodlawn House. Carved stone reproductions of this fruit was a symbol of hospitality.

Pineapples were a most exotic fruit in the nineteenth and early twentieth century. Their production in the hot houses of the estate is well documented. The luxuriousness of this fruit was captured in the ability to create deserts using ice from the ice house. There are many variations of iced pineapple for desert courses.

The tufted top was cut cleanly off the pineapple, and the flesh scooped out. The inside of the shell of the fruit was sprinkled with rum and sugar and then stood in a bucket of ice to chill. Small cubes cut from the pineapple flesh were also sprinkled with rum and sugar and chilled on ice. Next rum ice cream was prepared, and alternate layers of the cubes and the ice cream were packed inside the shell. The tufted top was replaced and the finished pineapple placed on a block of ice or crushed ice in a bowl