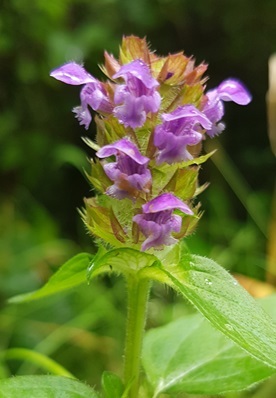 Identification Tips: Selfheal is a perennial plant. It has purplish-blue flowers borne in dense clusters on leafy stems. The corollas of selfheal are 10 – 14mm. Leaves are present in oval pairs.

A Bit More About Selfheal

You can tell a lot from a plant by its name and this is certainly the case with selfheal. Its Latin name Prunella Vulgaris can be loosely translated as ‘common purple’ whilst its Irish name “Ceannbhán Beag” means little bald head. Both make sense when you look at the plant. Its English name refers to how it was commonly used in the past as a healing herb.

There are reports that the plant is high in anti-oxidants. It was used in the past as a healing herb for the treatment of wounds and liver complaints.  It is recorded to treat people who were affected by the faeries. Other reports are that its Latin name may refer to the German word Brunella meaning quinsy, to cure. It suggested that Linneuas, the famous Swedish botanist, physician and zoologist who formalised the modern system of naming organisms spelt it wrong. I am not sure how true this is, but it is an interesting story none the less.

Selfheal attracts bees and butterflies in droves but it has no real smell. It is a great edition to a wildflower garden or wildflower borders. Gardening with wildlife is growing in popularity and with a bit of training you can recognise this plant in your garden and allow it to flourish.

Many parts of this plant are considered edible. Its leaves are recommended as a salad plant by many foragers and there are also recipes for selfheal pesto on the internet.