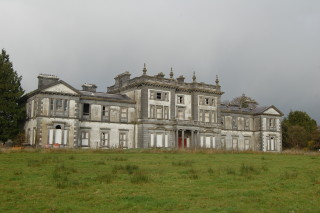 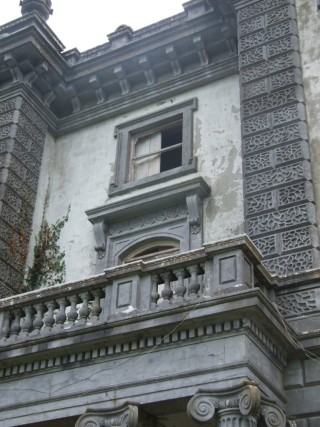 Showing detail at front of Woodlawn House
B. Doherty 2014

Woodlawn House is thought to date to the late 1750s. It was built by Frederick Trench, the grandson of John Trench, Dean of Raphoe (County Donegal) on lands originally purchased in 1702.

The First Edition OS Map (GA86, 1838) provides a very good plan of the building. This indicates the central rectangular block of the main house with a recessed single bay to the entrance front and wings with advanced end bays. The layout of the grounds as well as the scale of the farm buildings, which were not extensive at this point, is also recorded.

In 1860 the second Lord Ashtown transformed the building into a fashionable Victorian villa, externally and internally. The work was designed by J. F. Kempster of Ballinasloe.This included the creation of a new entrance front, the construction of a second storey to the wings and the redecoration of the interior. The works to the interior bring the Italianate design boldly displayed on the outer facade into the living quarters.

‘Woodlawn House is a fine example of the Italianate style, clearly bolder than what went before, richly embellished to its entrance front and to the ground floor interior in particular. The decorative elements to the exterior are executed in limestone, with a variety of treatments to the stone to allow for different textures that are used to great effect to provide contrast.  The ground floor entrance front has rusticated stone to the walls of the main block and to the quoins of the advanced end bays to the wings, which contrasts with the vermiculated rustication to the quoins on the first floor. The four fine carved pinnacles and the corbelled cornices to the parapet, the balustrades to the parapet and the balconettes and the corbelled cornices to the chimneys provide great richness to the building, as do the many styles of carved limestone surrounds to the windows’ (Paragraph from ‘Woodlawn – A History, Chapter 6, p 75)