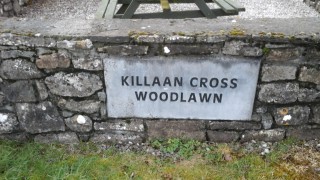 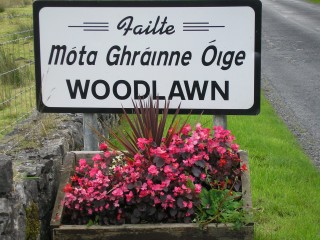 Those of you who are familiar with the place will be aware that Woodlawn has a huge number of shrubs, flowers and trees so for that reason its name is appropriate. Woodlawn Wood contains some beautiful trees and nature lovers could do worse than sample its delights by going for a stroll in The Golden Mile road, which begins close to Killaan Cross (parking and picnic area available). In addition to an abundance of flora, Woodlawn had a dance hall, school, water pump and of course the massive residence of the Trench family. Two huge stone lions were once perched on the pillars beside Trench’s entrance gate but they were taken away many decades ago. A Church of Ireland Church is located less than a mile from the railway station.

Diarmuid & Gráinne ‘Móta Ghráinne Óige’ is the gaelic name for Woodlawn and this translates as the moat or resting place of Young Grace. This bears no relation to the English version which was coined much later. Legend has it that Grace and her lover, Diarmuid Ó Duibne, were trying to escape from the powerful Fionn Mac Cumhall, who had earmarked Gráinne as a bride for himself. The pursuit of the young lovers extended over most of Ireland and Woodlawn is thought to be one of their places of refuge. Monaveen, a village close to Woodlawn, is also connected to The Fianna. Móinín na bhFíníní means ‘The Meadow of the Fianna’. It is fortunate to have place names in the locality that extend back to the pre-Christian era, linking us to Ireland’s ancient warriors.