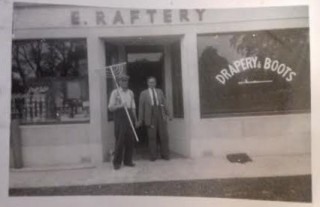 Ted Raftery on right, outside shop in 1950s.
Lilian Higgins 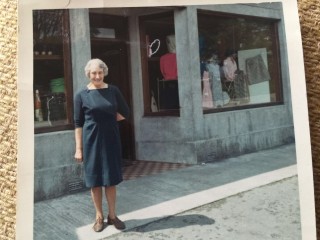 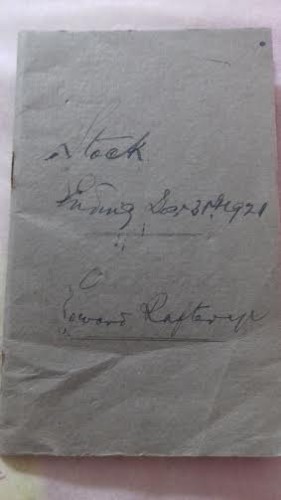 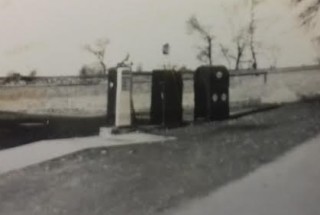 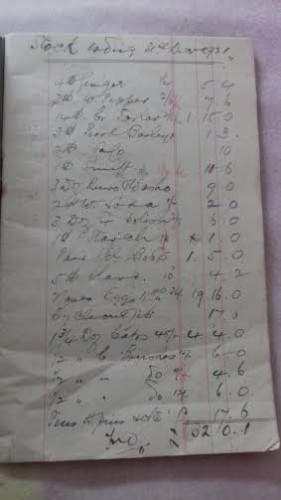 Patrick Raftery from Monaveen was a publican and baker. He had a large family and wanted to see his sons settled in business. When the Walker family put The Woodlawn Hotel on the market Patrick bought it for his second youngest son Edward (Ted). As there was no general store in Woodlawn, the purchase of the hotel gave Ted the opportunity to set up in business.

Ted Raftery was an enterprising and eager young man but because of his age he lacked business acumen. So Patrick employed a manager, from Ahascragh to help run the business. A man experienced in trade and book-keeping. They stocked the usual necessities like sugar, tea, flour, whole meal, and oat meal in the shop as well as animal feeds. O’ Rourke’s bakery of Ballinasloe supplied fresh bread twice a week. Responding to the demands of changing times they expanded their product range to include hardware and drapery. A stock book from 1922 -25 reveals that by then they were selling wellingtons, boots, sandals, nails, wire among other things needed by the local community.

In 1929 Ted married Cissie Glynn from Kilconnell. Cissie was raised in her family’s business “Glynns of Kilconnell” and was no stranger to hard work. Under Ted and Cissie’s keen business eye the shop thrived. The shop gradually became the hub for local community enterprise. Ted and Cissie bought eggs and butter from local farmers and resold them to Piggot’s of Gort.
As was the custom of the time farmers bought their weekly supplies on tick and paid when they sold cattle at the fair. At Christmas parcels were given out to all customers.

Cissie’s mother was the renowned artist Delia Anne Callanan from Kilconnell. Delia Anne had spent some time in Paris and had imbued her daughter with an eye for style and fashion. Cissie used her skill to help local women select outfits. She was often heard suggest a certain blouse with a jacket, or a matching skirt with a coat.

Raftery’s supplied paraffin for the paraffin lamps, coal and later petrol. Besides Ted and Cissie’s own car, there were very few cars around during the 2nd World War. Carrie Raftery, (second youngest daughter of Ted and Cissie) remembers a hand petrol pump behind the old gates into the yard. By the ’50s when the economy began to recover after the war, it became apparent that there was a need to modernize. A new shop was built by Dudley Mitchell, a local builder. Petrol and diesel pumps were installed by the road side. There were more privately owned vehicles on the road. The closest petrol stations were in New Inn and Mountbellew. There were none in Kilconnell at the time.

Business was very good during the ’50s and ’60s. Cissie and Ted had seven children and were actively involved in the local community. Cissie frequently helped the local nurse, listened to people and advised on family matters. Margaret Bowes from Cappataggle helped with the management of the house while Cissie and Ted worked in the business. Margaret was with the family for forty years and was considered one of the family.

It was a busy household with no time to loll about. The family were roped in to help when home on holidays from boarding school. Lilian and Carrie recollect weighing and bagging pounds of tea, sugar and flour from the large casks and bags. They added columns in the large ledgers. Their reward was sweets and chocolate.

As business expanded they employed more people. Denis Biggins, Angela Fitzgerald and Margaret Lally worked as sales assistants in the shop. Peter Kelly, Jack Brien, Peter Ruane and Martin Bellew from Carrahulla, were employed in the yard and farm, and helped with deliveries from the goods store at the railway station. Martin worked at Raftery’s for twenty five years.

Fresh fish was delivered on Fridays by Paddy Fitzgerald. The Connaught Laundry collected, laundered and returned neatly pressed suits and coats and sheets once a week. Credit was given by a Pass Book system. Parcels were given to all customers each Christmas. Ted also took a keen interest in the local activities. He was very involved in the organization of local community dances supplying the food and drinks. Denis Biggins, who worked at the shop, looked after the sandwiches and minerals on the night.
John Raftery, Ted and Cissie’s second son, joined the business in 1960. Eamon their eldest son had joined the Vincentian order and was ordained 1962. After John’s marriage to Maeve Murphy in 1973 he took over the running of the business. Cissie’s health was failing at this time and she passed away in 1975. Ted lived on until 1989. John and Maeve ran the business successfully until John’s untimely death in 1991. At that stage with the advent of supermarkets and the increase in the number of cars on the road it became more difficult to keep a small local business afloat. It was the end of an era.