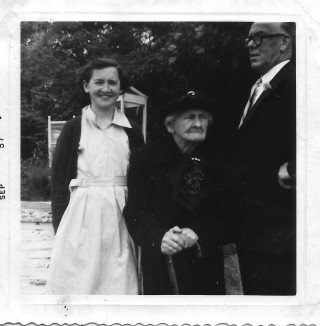 The late Mike Mitchell, who was my great-grandfather, started building houses on his own.  Individual houses here, there and everywhere, small cottages for the local small farmers, all in stone masonry of course.  There was no cement at that time. There was only lime and sand and the sand was generally got locally.  Anyway, my great grandfather took the contract from the parish priest in New Inn to build a school residence in Woodlawn, which is standing there today but it is in private ownership now.  He and his four sons, one of them, Mike also, was my grandfather.  My great great grandfather came to Woodlawn to build the residence.  A cousin of theirs, Tom Monaghan, lived on the road over to Kilconnell – it’s now owned by his great grandson, Paddy Monaghan – called in to the work site to speak to his cousins.  He was speaking to my great-grandfather and he said, “Michael, you have four fine sons there.”

“Well, I have Tom Monaghan,” he says, “but there’s none a’ them married and I’m looking for wives for them!  Ara, will ya be able to get them a wife?”

Tom Monaghan went up the road on his bicycle after bidding him “good-day,” and when he was passing up by a certain house, he thought, “Well, isn’t that girl in there lookin’ for a man.”  He turned on his bicycle and went back to the school residence and he said, “Mike Mitchell, there’s a lovely girl up the road there and she’s a marriageable, young girl and to the best of my knowledge, she’s going to have the farm.  She lives with her brother and her mother and I’ll introduce one of your sons.”  So Mike Mitchell looked up and Tom says,  “Mike, go home and wash yourself and put on somethin’ daycent on you. You’re goin’ to be introduced to a girl.”

So Mike gave the trowel a twirl on his bicycle and went home, up to Cappataggle, dressed and washed himself and came down at the time appointed.   Tom Monaghan met him at the gate of Killaan House, known that time as Cannon’s or Killaan House.   In they go and introduce themselves and they were made very welcome, Tom Monaghan being well known to them o’ course.  Mrs. Cannon and her son and daughter were there.   So in the course of the conversation, Tom told Mrs. Cannon his business.

“This young man is working with his father, building a residence down the road and I said I’ll introduce him to your daughter.” So Mrs. Cannon was all for it and she said, “Okay, there’s a dance here in the barn on Sunday evening.”   There was a barn at the end of the house.  ‘Twas part of the old grinding mill and they used to have dances in the barn.  The local people would come dancing, boys and girls.  I think ‘twas a small mill.  I remember in later years seeing the wheel before it was demolished.  Anyway, that Sunday evening, Mike Mitchell came down to the dance and he danced with the Cannon lady, Rose-Ann Cannon, and they started going out together.  Six months later, they were married in the church in New Inn. Mike Mitchell married into the house because Rose-Ann got the farm from her mother.  Her brother (Dudley) moved to Ballyfa, where he inherited a farm belonging to his uncle. The family of (the late) Tom Joe Cannon live there now.