You are here: Home>People>Mitchell & Sons 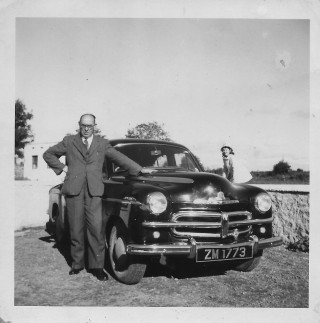 My father Thomas Mitchell started off farming and building with his wife Norah and he was building for the Woodlawn Estate, Lord Ashtown’s. Then he branched out and he was building private houses for different people.  On the road up to New Inn, there’s a number of them there. I won’t mention them all, but Donoghue’s, Ginnity’s, Miss Mc Greevey’s – they’re all up along the road.  Down the Woodlawn road, he built Sheridan’s and I can’t think of how many more.  He went down to Ballymacward, way down into Gorteen and into Ballinasloe.

His biggest contract at that stage was eight houses he built for the County Council, known as the Soldier’s Cottages inside in Pearse Park in Ballinasloe.  He also built a number of houses around about Pearse Park.  Then he moved into the town and he went building out in Creagh and up around the top o’ Garbally hill there, built numerous houses up along there for teachers and mostly nurses – male nurses that were known that time as keepers in St. Bridget’s Hospital. He built Guard houses.  They’re still all there.  But they changed hands and changed ownership now.  Passing it I often wonder who’s in that particular house now.  Anyway, he then started working for the mental hospital, known as St. Bridget’s Hospital now, but it was the Mental Hospital that time and ‘twas owned by Galway County Council. The biggest contract I suppose he took off them was the building of St. Enda’s Hospital, down the Creagh road.  That was a major contract for my father to take on.

He did a huge building for the Convent in Loughrea, also the Convent in Ballinasloe.  But a major extension he did in Loughrea was St. Raphael’s Secondary School – it’s there today.  It’s a huge secondary school. It was a four-story high building.  At the same time, he was building John Heuston’s in Craughwell, the film director, St. Cleran’s in Craugwell. That was all going on at the one time.  Also, he had a contract going on in the Hospital in Ballinasloe.  He had three major contracts going on at the one time.  How he took control of it, I don’t know.

My father was brilliant for a man that only had National education but he seemed to have grasped everything.  In fact, he did all his own estimatin’ by hand.  He wrote all his own letters by hand and his handwriting is unbelievable.  Later years, he could do addition or subtraction far quicker and far better than any of his family. He did his own wages, he paid his own money, every week, mostly in cash.

There was very little machinery at that particular time.  Concrete mixers was as much as they had, running on petrol of course.  He drove his own lorry.  He collected most of his timber in Dublin.  He’d go to Dublin at least one day a week on the lorry, five hours trip, driving his own petrol lorry.  I remember when I was only a kid seeing him doing it. He’d set off in the morning at half past five, on the way to Dublin to take on his load at Brooks Thomas in Dublin.  Down at the docks o’ course the timber was stored and he’d collect his load there and come back down again.  It’d be seven or eight o’clock when he’d arrive down from Dublin and unload the following day on whatever particular site ‘twas going to.  He drew his own gravel at the time.  They’d raise the gravel at a local pit somewhere and he drew it with the lorry as well.  That time it had to the loaded by hand.

Anyway, he continued on working. Of course he did a huge amount of work for the Church, convents and churches everywhere round about the Diocese, including the Bishop’s house in Loughrea.  Now Michael and meself had joined him in the Company, Thomas Mitchell and Sons, which was his name, and Sons. We both became directors of the Company. Consequently, when my father passed on, we became the owners.

There were nine carpenters working in the workshop in Woodlawn.  Mick Coen was the foreman.  In later years, the late Paddy Kelly became foreman and Mick Coen moved on, started up his own business.  Paddy Kelly was a master joiner, learned his trade in Woodlawn in actual fact.  He went into Woodlawn from New Inn Vocational School.  So did most of the men who were in it.  My father used to take on two apprentices every year from the Vocational School in New Inn and they’d be trained up.  At that time, they had to do between four and six years apprenticeship before they’d start off.  I remember this distinctly.  Their first wages would be about £6 a day.  In later years, they’d do what they called a Release course. They’d have to go down to Anco in Galway, so many times a year, and your employer would have to pay you even if you were below in Galway.  That was the contract.  That was the agreement when you signed up for your apprenticeship.  It was also the agreement with every other employer as well