You are here: Home>People>Tall Tales

Who milked the cow? 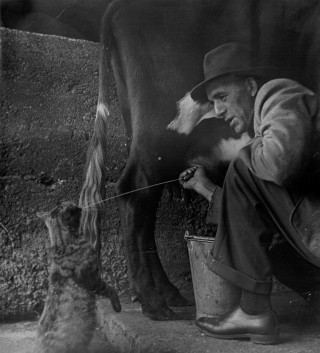 The cat that got the cream!
By George Echlin, early 1960s, courtesy of Alf Seale

There was a man and his wife and family up in Dromnamanagh, one time, years back now – ‘twould be the 1800s. And they had one cow. That’s all they had at the time, like. The cow would have a sup a milk in the evenin’ but when they’d g’out in the mornin’ to milk the cow, she wouldn’t have a tint o’ milk, the cow. Not a tint o’ milk. And they were sayin’ that someone was comin’ and milkin her, d’ye know. And he used to get up early then. No good, he’d see nothin’. But he wasn’t getting up early enough. Someone said, “Get up earlier. Whoever is comin’ is comin’ very early.”

He got up this morning before daylight and he was watchin’ and watchin’ and lookin’. And this hare came along the rushes. The cow was lyin’ down. The cow stood up the very minute the hare came and the hare went in under her and sucked her dry. That’s the truth. I heard them sayin’ that. But, d’ye see, ‘twas a human, d’ye see, that was dead. Formed as a hare. People does come in different forms, d’ye see. When they die, they come back in different forms, so they do. They come back as a hare, or a dog, or something like that.