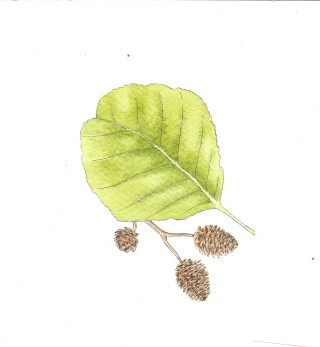 The Alder is a widely distributed deciduous tree growing to 20 metres or more. It may be found in damp areas, along rivers, banks and streams. It thrives in boggy ground. Alder is a productive timber tree and will grow quiet rapidly.

The leaves are round or broadly oval with an indented tip and toothed margins. It has separate male and female catkins. The female catkins when ripe are brown and woody. These can help with identifying the tree in winter time.

Folklore tells us that Alder timber was used to make shields for warriors going into battle. Alder timber is also known to be resistant to decay when submerged in water. For this reason, it was used to make sluice gates and other structures along streams, rivers and canals. Alder was also the chosen wood for making clogs which were popularly sold to the cotton mills in England.

There was a clogger in Woodlawn at one time. They used to cut the alders especially for him and they had to be cut a certain length. The clogger, all he did was split them. If he split them right, he could get, I think, four soles out of every log.  The rest was waste then.  You could buy clogs up to lately.  Around Cavan you’d see the aul lads with the clogs on them. But he was actually from Ahascragh, the clogger – Raftery.  There was even a song about him.  I don’t know all the words of it but the only bit that I can remember is the “The clogger” or “Raftery making clogs in Ashtown’s bogs.”  That’s the only bit I can think of. The hut was in your [Des Doherty] direction now.  It’s near the railway.  The aul clogger’s hut, the remains of it, was there til not so long ago, (maybe 20 years ago).