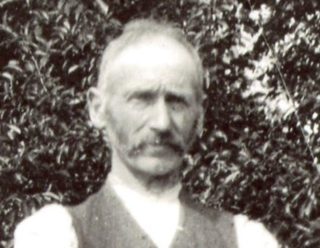 There are three different kinds of churns namely, the machine churn, the dash churn and a barrel churn. We have a barrel churn and its height is three feet its breadth is two and a half feet. If you wanted to lift the churn down from place to place there are four iron handles on the frame. Our churn has a round body.

If any strangers come into the house when the churning would be going they would take a churn because the old people say it would be unlucky to go out without taking a churn. It takes about a quarter of an hour to churn in Summer and half an hour in Winter. When churning some people would put a coal under the churn to bring good luck to the butter. Salt is also threw on the lid to keep away bad luck.

There is a glass in the lid of our churn and you can see the milk through it. When that glass is clear the milk is churned. A dish and two patters is used for taking out the butter. It is washed twice and then it is salted and washed again. The barrel churns are the older churns, but it is the dash churn that is mostly used now. The machine churn is the easiest to churn. The buttermilk is used for making bread.