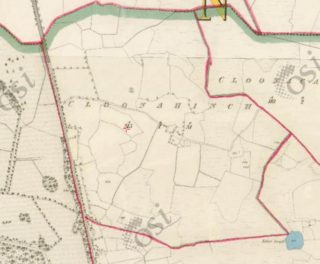 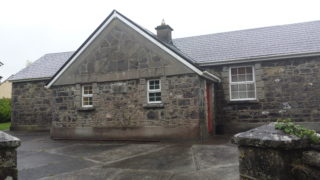 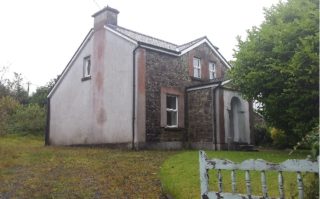 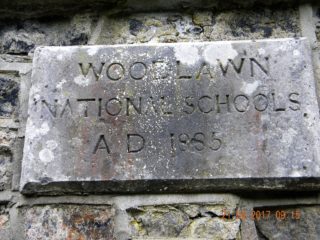 Cloonahinch derives from the Gaelic Cluan na h-Inse, meaning lawn of the island/holm.  Cloonahinch is a townland in the civil parish of Killaan in the electoral district of Kilconnell.

Cloonahinch lies in the North East of the parish bounded by Cloonacalleen, Killaan and Woodlawn in Killaan parish as well as Carhoomore of Kilconnell parish.

In 1838 this was the property of Lord Ashtown, held by deed for ever.  It contains a.r.p. (acres, roods, perches).  It was noted at the time that half of the land was bog but the remainder was arable land of ‘middling quality’.  The houses and roads were in good repair.

Griffiths Valuation for Cloonahinch was recorded in 1856. The townland comprises 215 acres, 1 rood and 31 perches.  The annual rateable value of the land was £86 5s 0d and the buildings were valued at 15 shillings. Its total rateable value was £86. The landholder was Lord Ashtown and there was a single dwelling, comprising of a house and outbuildings.  The tenant was John Quail.

Census records for 1841 show there were 17 males and 15 females residing in 8 houses in Cloonahinch. There was one uninhabited building. Ten years later in 1851 the number of people had dwindled to 8 males and 4 females who occupied 2 houses. The uninhabited building was not recorded.  The Poor Law valuation in 1851 amounted to £84 5s 0d.

The Census of 1901 for Cloonahinch shows the enumerator recording two 2nd class inhabited dwellings and one uninhabited which was the National School.  The heads of households were ThomasCahill and Michael Cormican.  The landolder for these 3 buildings was Henry Foreman.

Thomas Cahill (43) lived with his wife Anne (35) and their children Angela (8) Eileen (6) Patrick L.L., (4) Thomas E. (2) and Leo Augustine (no age registered).  Thomas’ occupation is recorded as a Commission Agent and Anne was a National School teacher.

Michael  Cormican (42) lived with his wife Margaret (38). Michael’s occupation was recorded as Sheperd whilst Margaret was a Housekeeper.  There were no children.

The census of 1911 for Cloonahinch records two inhabited 2nd class dwellings and the National School.  The landholder was Lord Ashtown. The heads of households were Richard Seale and Thomas Cahill.

Thomas Cahill lived with his wife Anna Maria (47)and their 6 children, Angela Marion (18) Aileen Nora (16) Thomas Edward (12) Leo Augustine (10) and Vivienne Christine (7).  Patrick L.. L. who was recorded in 1901 was missing from the 1911 form.  Thomas’ occupation was recorded as DC and CPLG whilst Anna Maria was recorded as a National School teacher.

There are two sites of interest in Cloonahinch. The first is an oval depression in the ground that after examination in 1986 was discovered to be an unused quarry.  The second is where, in 1972, the remains of a body was discovered in the bog.

Recorded Monument GA 086:083 (Quarry) on inspection proved to be an oval depression depicting a disused quarry.

Recorded Monument GA086:255 (Burial) was discovered in 1972 by two men cutting turf.  A pair of human feet was discovered in a bog at Cloonahinch, near Woodlawn, Co. Galway. Professor E. Rynne visited the site and reported that the find spot had been completely destroyed. It is possible that the feet were the only surviving part of a more ancient bog body which had been exposed and dispersed over years through turf cutting (Ó Floinn 1995, 227) (pers. comm. M. Cahill and M. Sikora, )