Front elevation of stable buildings prior to restoration
Anne Carey 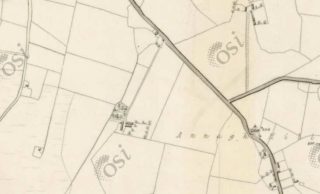 A public talk on the conservation of a traditional stone barn was held on Saturday 12th October 2019 at Annagh House, Ballymacward, Ballinasloe, Co. Galway. John and Terry Hanlon invited Anne Carey, MA MUBC MIAI,  Archaeological and Historic Buildings Consultant to discuss the project at their home. Anne is one of several experts involved in this restoration project. The talk took place in the restored stable building.

The stable building is located in the townland of Annagh, in the parish of Ballymacward. The name Annagh is derived from the Gaelic Eanach, meaning marsh or cut out bog. Annagh House is a late nineteenth century building (c 1862) with early to mid nineteenth century outbuildings to the south west The First Edition Ordnance Survey Map (1838) shows three rectangular buildings, one of which is the subject stables building on the site to the west of Annagh Hill.

The works comprised the replacement of decayed roof timbers to the front and rear pitches of the main stone barn,. The condition of the existing battens, rafters and cross ties were found to be very poor following stripping of the roof slates and timbers replaced. The existing poorly preserved loft floor to the small barn east was replaced with a new timber floor, using 9’’ by 1’’ timber boards.  A new marine ply floor was constructed in the main barn and access via timber stairs was provided to the first floor loft space from the ground floor. The works to the two storey stone barn have brought back into use a spacious loft area in the main barn and upgraded the existing loft space in the small barn, The poor condition of the roof to the main barn required that it be removed but the replacement of the original slates and the extensive parging internally have enhanced both the appearance and the functionality of the building.