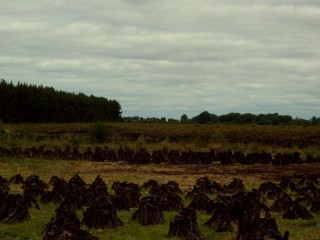 Talk about hard times. Well, you went to the bog with a pony and cart and a slane. You had two men working the barrow and the man cutting. Me father was cutting. You had the barrow man for two or three days. You were working under awful circumstances. ‘Tis all right now. The hopper cuts it. We had to draw the turf from Coolin.

You had to watch the clock, get out at half eight in the morning. You’d be home here at half eleven.  You had to give something to the horse and to yourself. Be on the road again in half an hour, and be here again at three, and you might give yourself three quarters of an hour to eat a dinner and feed the horse again. Go again at a quarter to four, or four o’clock, and you’d be back be seven.

After Coolin we went to Moyarwood bog. ‘Twas a lorry that was in then and that was a different system. Ah, the lorry made it way different. I know now you wanted help to fill the turf, but at the same time, you got it home in the one day. Then we saved the turf in Reilly’s. ‘Twas a long journey up.