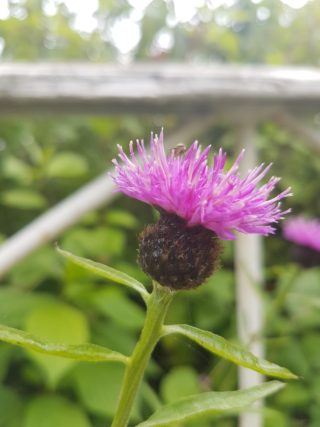 Identification Tips: It is a tall hairy perennial[1] which can grow up to 60cm in height. It looks a bit like a thistle from a distance as it has a blackish-brown sphere-shaped head topped with purplish pink and sometimes white flowers. These flowering heads are solitary and measure about 20 – 40mm across.

A Bit More About Common Knapweed

Common Knapweed is perennial and believe it or not it also a member of the Daisy family. It is common enough in Woodlawn and can be found both in the woods and the bogs. It is a favourite of butterflies and other pollinators because it is a good source of nectar. Interestingly, I remember reading before that butterflies in springtime will first favour yellow flowers like Dandelions but then as the year progresses tend to favour purple flowers. I wonder is there any truth in this?

The name Common Knapweed is supposed to come from the old Norse word for ‘Knappr’ meaning bud or knob. You will most likely notice this plant in flower between June and September, however with a bit of training you will learn to notice old stems in the Wintertime, by looking out for their brown knobs and spheres! Goldfinches will regularly check these dead heads to pick around for any little grubs who may have decided to use them as a winter shelter.

Knapweed was used as a healing herb in the past. It is also reported that the dead flower heads were sometimes used to ‘chalk’ snookers cues. I wonder might they have been used in the Billard’s Room in Woodlawn House?

[1] A perennial plant is a plant that lives for more than two years. The term is often used to differentiate a plant from shorter-lived annuals and biennials.