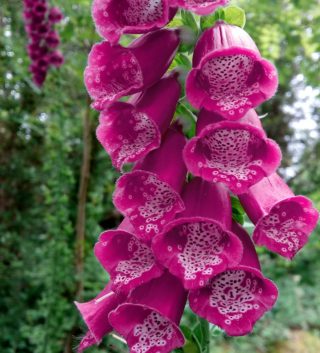 Identification Tips: A perennial plant that grows over two years. In the first year, it has a silvery basal rosette of downy grey leaves, followed in the second year by a beautiful tall pinkish purple (sometimes white) flowers. The flowerheads are tubular to about 50mm. They look a bit like purple bells and have dark spots inside.

A Bit More About Foxgloves

The little flower head of Foxgloves look like faries’s fingers. When we were young, we were always told that we shouldn’t pick them as the faeries would only get annoyed. In other places the flowers are called Fairy Bells. Others say that the purple flowers are worn by foxes to help them get around by night without being seen. Whatever, the truth may be in these matters,  the foxglove is a favourite of bees and other pollinators.

The foxglove is considered a poisonous plant for humans and should never be consumed. They are however a source of the drug ‘digitalis’ which is used by the medical profession to treat certain types of heart problems. That someday we might need this drug ourselves, reminds us of the great resource that nature and all its biodiversity provides us with. No wonders the faries are so fond of it!