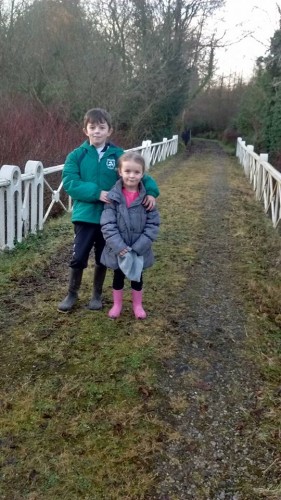 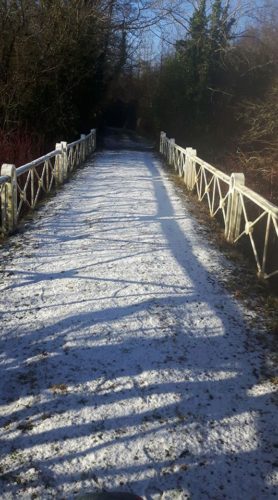 National Library of Ireland has a picture entitled ‘View of cottage and bridge on the grounds of Woodlawn House‘ by Dillon Family 1865. The White Bridge in the background spans the lake that was once quite visible on the grounds. It was ornamental yet had its purpose along Lady Anne’s Walk. Today the bridge is still intact (albeit in poor repair) and can be crossed on foot only. It is a feature of our Nature Trail and Golden Mile. Another picture of the bridge from the Dillon Family Collection is reproduced in our publication, ‘Woodlawn – A History’, Page 84.

Ronald C. Cox visited the Woodlawn Estate in 2003 as part of a Survey on Demesne Bridges in Ireland. He describes the bridge as an ‘important three span cast iron viaduct’. The bridge measured ‘three spans of 26′ and the spandrels are in-filled with latticing which is continuous across the intermediate piers.’

The wooden handrail is slipped through and wedged into the cast iron. Casting began in Ireland in the 1830’s.

The White Bridge is a protected structure, coming under the protection of Woodlawn House RPS 161.

While walking the white bridge my father “Sonny” told us that in his youth delivering eggs to the “Big House” that if a “commoner” was seen using it they were reprimanded and told not to be seen near it again….. It was for the ladies of the house to take an evening stroll in all their finery.