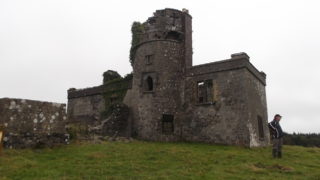 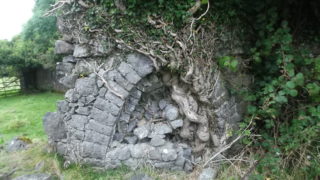 Recorded Monument GA 086:239 (Country House) can be seen at a distance along the Golden Mile to the back of Woodlawn House. Thought to be an original ‘castle’ its location on a slight rise within this somewhat flat landscape give the impression of a castle, with its round tower. The round tower itself is intriguing but the fabric would suggest a later date. Red brick is visible within the construction although some of the stone may have originally been re-used from an earlier building. The main building is most definitely later.

Bee-hive boles within the walled garden ensured a supply of honey and beeswax. Traces of a wall which would have fenced in ‘the game’ are visible along the (now open) field.